Well, the votes have all been counted and double checked and I can announce that the winner of the True Colours Best Premier League Kit for 2010-11 is the: 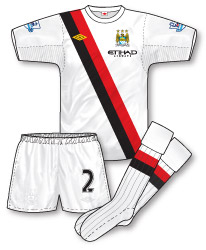 Congratulations to Umbro who produced the kit and who incidentally also won last year’s True Colours Best Premier League Kit with that season’s Manchester City home strip. This time round though the third swept the board, closely followed by Manchester City’s home kit. Seems Umbro and City are definitely doing something right up there!!

Whats interesting as well is that this winning kit is one of the rare football outfits that has a two-year lifespan – food for thought really that in this day and age, when football kits come and go in a single season, that a strip is just as popular in its second year than it was in its first. All credit really to this superb Umbro design that reinvented a long forgotten City away kit style from the 1970s and brought it bang up to date. Perhaps the fact that the sponsors’ logo takes a bit of a back seat in order not to impinge on the design had something to do with it?

Last year saw the strip worn with black shorts and socks, this season though the overall strip has been updated with the home kit’s white shorts (complete with tonal badge/logo) and a smart new design of socks (featuring red and black bands) now being favoured, although the previous season’s black shorts have been worn on occasion.