Text and photos by Chris Oakley

These days the launch of a new football strip isn’t what it used to be. When I was young, you were lucky if you caught a glimpse of England’s new kit on John Craven’s Newsround, but my, how that ten seconds of footage would have lingered in the mind until you saw it for real in their next international match. As for every other new kit, a token picture in Shoot! magazine was all you could really expect.

Nowadays, kits are launched with fashion shows, pop concerts and all manner of hullaballoo. It’s all well and good, but what do we actually learn about the kit itself? Quite often, we learn very little at all.

Fortunately the launch of Puma’s new range of strips for teams competing in the 2012 African Nations Cup has bucked the trend. On November 8th 2011, the Design Museum in London provided the setting for ten kits to be introduced to the world – and for a new exhibition showing how they were designed.

A wander around the second floor of the museum is most enlightening. Admittedly before I arrived, I expected to see nothing out of the ordinary beyond a few mannequins sporting de rigueur outfits accompanied by industry waffle telling of the ‘unique breathable nature of the fabrics used.’

Fortunately, this was altogether more inspiring. The kits themselves were predictably colourful. The vivid green shirts of Cameroon, the bright yellow of South Africa, the searing white of Ghana and the deep red of Namibia were all there to be seen. That, however, was only half the story. What makes this such an incredible range of kits is the fact that Puma have commissioned ten artists from their Creative African Network to produce the new shirt designs. Not designers – artists.

The distinction is worth making because of the way each of them has looked to their soul and the identity of their home nation for the ideas that are made manifest in each new shirt. Luckily for people like me who visit the exhibition, those thoughts, ideas, dreams and stories are all writ large for everyone to see.

We hear how Zineb Sadira used the geometric patterns of the tiles found in Islamic buildings to create the design for the new Algeria shirt. We see how Samba Fall drew a Baobab tree for Senegal’s new shirt to symbolise the coming together of fans from across the country as they follow their team in international competition. We also discover how Hasan and Husein Essop depicted a series of rainbows on the South Africa shirt to symbolise the diversity of cultures celebrated in the post-Apartheid era.

As well as the words and the kits themselves, there are also the original sketches made by each artist providing a fascinating insight into the original ideas that led to each shirt design. There are also videos to watch featuring interviews with the designers and all the visual imagery you need to understand the passion of Africa football and the part these kits will play in perpetuating it.

The exhibition ‘Interpretations of Africa: Football, Art and Design’ runs at the Design Museum, London until 27 November 2011 and is well worth a visit if you want to fully appreciate this innovative approach to football kit design. 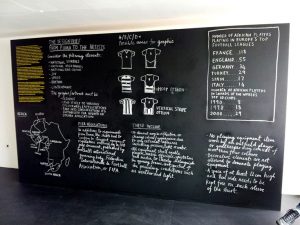 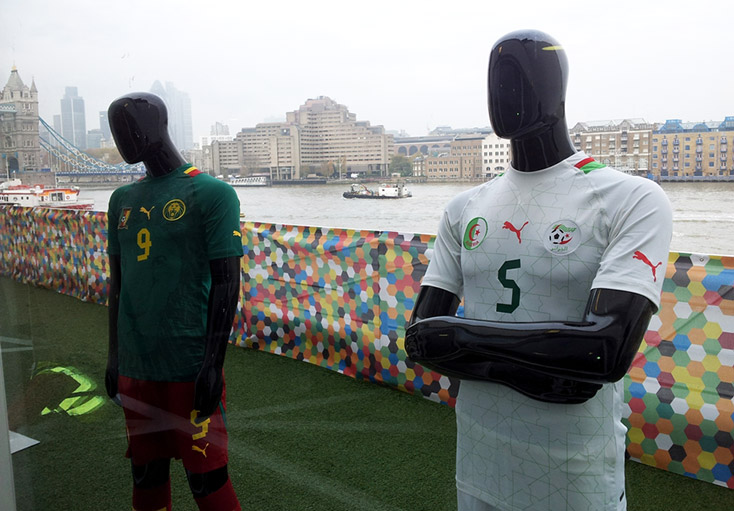 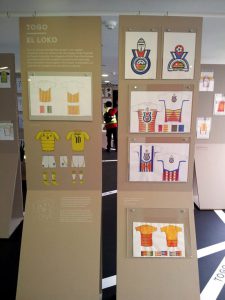 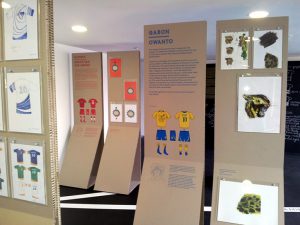