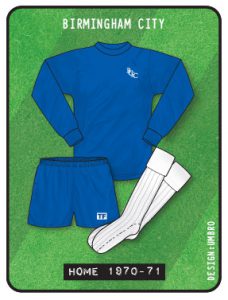 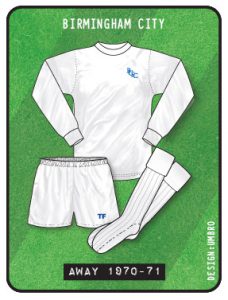 Birmingham entered the 70s in the 2nd Division and sporting the simple blue shirts (with non-contrasting crew neck and cuffs), blue shorts and white socks that they had favoured since 1967. The 70-71 season saw the strip updated with the addition of a slick BCFC monogram over the left breast of the shirt and, in a trendsetting move, the addition of individual player’s initials on the shorts – an idea that was also favoured by several other clubs at the time. Worn by: Ray Martin, Roger Hynd, Alan Campbell and a young Trevor Francis making his debut for the club. 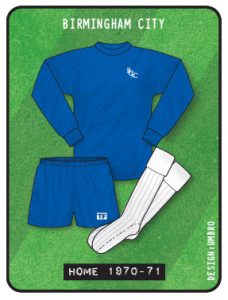 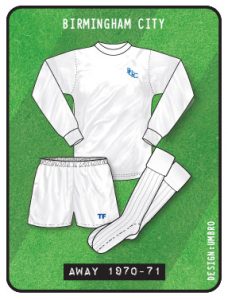 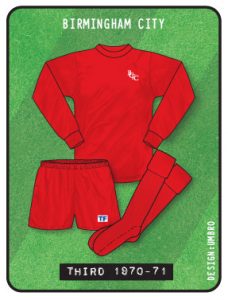 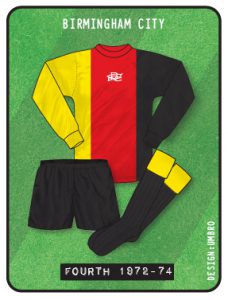 The 70s was a flamboyant decade fashion-wise and this extended onto the football field. In Birmingham’s case the simple royal blue shirts that had been worn since the 1910s were ditched in 71-72 in favour of an Umbro-produced jersey that is now universally fondly remembered as the ‘Penguin’ with a broad white band placed centrally over the blue fabric. A new intertwined monogram badge was also introduced at this time. A red and white version became the club’s new away strip and was worn for two seasons before being retired after just a few games at the start of the 73-74 campaign. It was replaced for the rest of the season by an all white strip. This period is also memorable for the famous German Flag kit that was worn as Birmingham’s third kit for the 72-73 and 73-74 seasons. Worn just a handful of times and notable for its tendency to render wearers almost invisible under floodlights it stunned Blues fans when it was unveiled for a 2-2 draw at West Brom in the 72-73 campaign. The penguin shirt clearly inspired the club, led by manager Freddie Goodwin, and they won promotion to Division 1 (after seven years in the 2nd Division) and reached the FA Cup semi-finals in its first season of use. Worn by: Gordon Taylor, Bob Latchford, Malcolm Page, Bobby Hope. 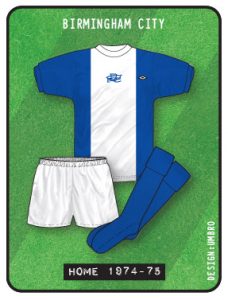 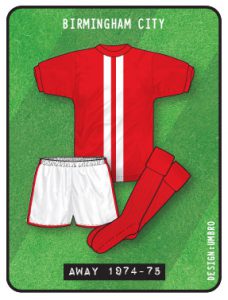 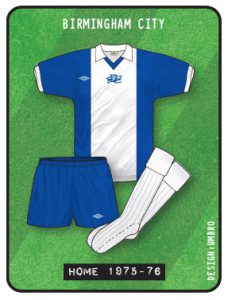 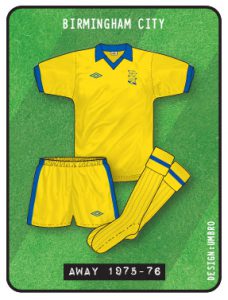 By 1974 manufacturers logos were commonplace on team kit and the Birmingham shirt was updated for the 74-75 season with the addition of a small Umbro logo over the right hand side. The shirt was also now short-sleeved. Early versions of the shirt worn that season actually featured the older blue and black Umbro logo design on the left hand side of the jersey. 1974 also saw the introduction of a new red away strip that included two vertical white stripes down the centre of the shirt. Strangely the away shirt featured neither an Umbro logo or club badge but did include a rather trendy pair of athletic-style shorts, trimmed with red. The Penguin shirt was updated again the following season with a typically 70s wing collar replacing the crew-neck. The shirt was also now worn with blue shorts and white socks instead of white shorts and blue socks. Worn by: Joe Gallagher, Kenny Burns, Howard Kendall, Paul Hendrie. 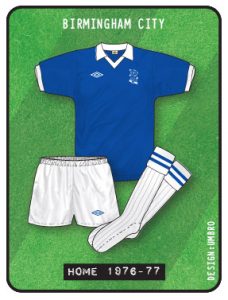 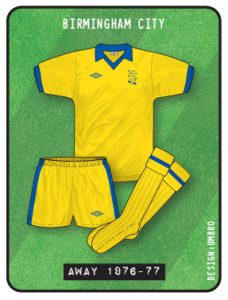 After five years of the distinctive Penguin design, Umbro launched a more sober home shirt in 1976 – a plain all-blue affair with a standard white collar and cuffs. The shorts and socks were now both white with a dual blue hoop on the socks turnover. A new amber with blue trim away kit was also revealed this season. Both kits were to last for just one season due to the arrival in 1977 of adidas. The shirts were also notable for the inclusion of a new club badge featuring a combination of a globe and ball embellished with ribbon. The badge had been originally selected in 1972 following a competition run by local newspaper, The Sports Argus. Worn by: Gary Emmanuel, Kenny Hibbitt, Jim Calderwood, Archie Styles. 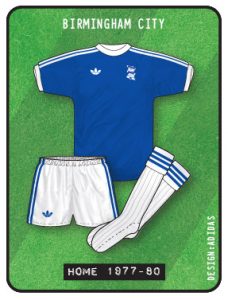 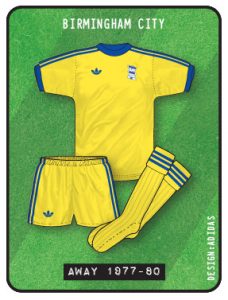 Adidas’ first set of kits for the Blues brought the club’s strip bang up to date with a sleek, shiny synthetic fabric replacing the cotton of Umbro. The shirt featured a white crew neck alongside adidas’ trademark three stripe trim that continued in blue on the white shorts and socks. The yellow away strip simply mirrored the design of the home and the yellow shorts and socks were occasionally worn with the home blue shirt if there was a colour clash. In the 77-78 season the adidas logo featured just the trefoil graphic without the adidas text on both kits. Unfortunately this adidas kit accompanied the club as they were relegated to Division 2 at the end of the 78-79 season after seven years in the top flight. Worn by: Alberto Tarantini, Dave Langan, Pat Howard, Alan Ainscow, Keith Bertschin.