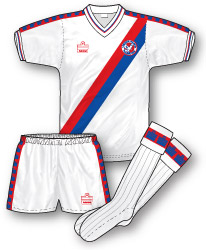 It may not have been the first appearance of Crystal Palace’s iconic sashed kit design but this Admiral incarnation, fondly remembered by the Palace faithful, is arguably the greatest. The sash first appeared in The Eagles’ kit cupboard in the 1975-76 season with flamboyant and kit-savvy boss Malcolm Allison the instigator. It became first choice home kit the following year (replacing the club’s Barca-like red and blue stripes) and when Admiral took over kit duties in 1977 they updated the design with bold red taping featuring, of course, multiple Admiral logos, and an elegantly trimmed V-neck and cuffs. It was a strong and confident design – perfectly suited for Terry Venables’ up and coming young Palace side.

Worn by: Gerry Francis, Mike Flanaghan, George Graham.
Worn in: The glorious 2-0 win over Burnley in the last game of the 1978-79 season that clinched the Division 2 crown and sealed promotion to the First Division for “The Team of the Eighties”.