The dust has settled somewhat on the biggest kit controversy 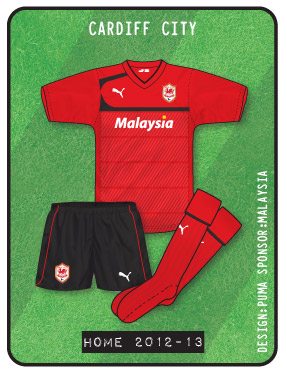 of the summer – namely the decision of Cardiff City’s Malaysian owners to switch from the club’s traditional blue shirts (a colour they have worn since their formation in 1908) to red. The changeabout has come as part of a radical rebrand of the club and includes a new ‘Red Dragon’ badge replacing the team’s familiar blue bird crest that of course gave the club their nickname.

Its a radical decision that has, suprisingly, not found universal disapproval amongst the Cardiff fans. In fact many are behind the switch, their opinion no doubt sweetened by the massive investment Cardiff’s owners promise, an investment that will attempt to lift the side out of the Championship and clear their debts.

Clearly firm believers in the financial wallop of a strong brand the club’s owners chose red as the colour as it is believed to be lucky and powerful in Malyasia with the new red dragon badge, apparently, also an Asian symbol of good fortune. According to the club’s owners, this is all designed to celebrate the clubs’ Welsh nationality and to integrate the club firmly into Asian culture.

Its not the first time a club have completely overhauled their colours in the past few decades (e.g.Leeds, Doncaster, Leyton Orient and Crystal Palace – several times) but is one the first in recent years and it seems to have sent shock waves around the, thanks to the internet, increasingly kit savvy football fans.

There is some credence in what the club’s Malaysian owners say in that red has been proven to accompany the majority of the UK’s leading sides in the modern era but is that a good enough reason  to abolish over 100 years of history at the whim of the man holding the purse strings?

What worries me is that the tail is now firmly wagging the dog. Whereas many of the above mentioned colour changes were made no doubt to improve the clubs concerned’s fortunes few were spearheaded purely by a financial and marketing perspective with hard cash providing the sole reason for the change. It could be said that the club have sold their soul in order to become financially secure. In these difficult economic times can any football fan blame them? Is it just good business sense?

I still think its a real shame that the tradition and heritage of the Blue Birds has been discarded under the potentially false perception that success will follow the rebrand. If red is so powerful why doesn’t every side just play in the colour?! Tradition and identity are now being eroded at an increasingly fast pace in the football world. Shirt sponsors bring in valuable cash and don’t impinge TOO much on the club’s identity but a wholesale badge, colour and brand ethos chews it up and throws it away. All for the sake of supposedly making the club a stronger brand – especially to the far east.

Its a massive risk and one that could quite easily flop dramatically.

The biggest disappointment for me is the fact that the rebrand occurred less than a month after the club’s owners issued this statement on the 10th May denying earlier speculation that a rebrand was imminent:

“In the light of the vociferous opposition by a number of the fans to the proposals being considered as expressed directly to our local management and through various media and other outlets, we will not proceed with the proposed change of colour and logo and the team will continue to play in blue at home for the next season with the current badge.”

So what the hell happened?! Why have the club’s owners lied to their supporters? And why has this statement not been highlighted by the media once the rebrand was confirmed. This to me, is the more serious issue here. Club’s owners just toying with clubs and supporters purely for financial gain. Clearly since the above statement was released there was another change of mind and the new red and black kit and, to be honest, rather unfinished and rushed looking badge unveiled.

The fact that the club have not made a clear break and added insult to injury by announcing a blue away kit makes the whole situation farcical. I would suspect that the blue kit was intended to be the home design and the red the away but when the decision to go ahead with the colour change was finally made they simply switched the designs. The links to Wales, which I don’t believe was a major issue when the rebrand was first mooted, could be seen as being merely a lure to appease supporters.

A rebrand is much more  than simply changing colour – it involves massive personal emotional investment and commitment by everyone involved, in a football club’s case, this includes the fans. Perhaps the Cardiff faithful will 100% back the move or maybe we’ll see more blue replicas on the terraces than red.

Cardiff have set a dangerous precedent. If this kind of control over a club’s identity and heritage can be wielded by the owners on a whim how long will it be before more clubs make similar changes? And what next? What will stop club names being adapted to include their sponsors’ brand? Its happened with stadiums for several years now and could well happen to clubs sooner rather than later.

22 Replies to “The Cardiff Kit Controversy”