The New Fabric of England

Well that was a surprise wasn’t it? Compared to the high profile launches of England’s previous few kits, the new England home outfit hit the pubic in a decidedly low-key fashion. Perhaps its understandable as the English public don’t exactly hold the England team in high esteem at the moment after the World Cup debacle. What is surprising is the vicious, angry and negative response the kit design has received so far. Many comments about the design are being tainted by the fact that a new kit is being launched a) so soon after the poor World Cup and b) not two full years since the last home strip. Plus, of course, frustrations with the players and Capello are also tainting the opinions of the kits.

I want to concentrate on the design, but I must just comment on the other negative issues surrounding the new strip. As readers of True Colours will know I am the firm opinion that any kit should last two years or two seasons. Unfortunately that is not the way the football world works at the moment. Also, like many, I was under the impression that the previous World Cup home kit would last until 2011. Again, it seems that in international football kit lifespans are becoming more flexible and are liable to change.

Basically, the new England kit was always going to be launched in time for the Euro qualifiers. A fresh start – new team, new tournament and new kit. The fact that England failed in the World Cup is not Umbro’s fault and shouldn’t influence opinions on the design of the new kit. So, on to the new outfit..is it any good? In a word, YES!

And that’s whats so frustrating about the whole affair – the kit is an absolute cracker. I defy anyone seeing it in action for the first time during the England vs Bulgaria game to come out and say its not a good design. It looks great, it screams ‘England’ and is totally fit for purpose. Good to see blue shorts returning and interesting to note the brave move back to the more ‘royal’ shade of blue worn in the 70s and early 80s, along with clean and simple socks. On to the shirt.

Naturally it features Umbro’s tailored approach with comfortable/functional fabric and superb fit. The most striking feature is the neckline. On first glance it reminded me of a rugby shirt with the long plunging neck design but after seeing the shirt in the flesh, with its curved collar it actually resembles more of a 1920s jersey. The thinking behind the long neckline is that it allows for greater movement in the garment across the chest.

The recent red Umbro logo is notable by its absence and therefore the kit is completely bereft of the colour – its just white and blue. Again, this has caused a murmurings among many England fans. Sure, its a colour in the English flag, but plain white and blue is actually a design aesthetic that has been in England kits for decades. Its only recently that red has become a key part of the nation’s strips, but look at the 1966 home kit that all England fans are keen to claim as the ultimate England outfit – there was no red in the kit there. Plus, imagine the horrors if all international shirts simply resembled the nation’s flags! It was felt having a red Umbro logo caused the design to look unbalanced. It wasn’t a decision taken lightly and has repercussions – especially when you consider Umbro’s recent rebranding and its intrinsic links with the England kit.

The rest of the shirt design, at a glance, is just plain white (cue criticism “its just like the old shirt”) but to my mind this maintains the workmanlike ethic that Umbro imbibe into all their kits. Not designed just to look flash, they are there to do a job. Once again the jersey is constructed from two different fabrics and includes the already infamous Peter Saville panel on the back and shoulders. 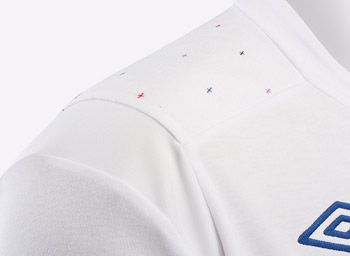 Now, first I must say I’m biased here. As a graphic designer Peter Saville is a big hero of mine and I love the thought and consideration he puts into every piece of work that bears his name. His contribution to the England shirt is definitely coming from a graphic perspective rather than fashion. The panel features miniature “St George’s Cross” motifs in a variety of colours including red, blue, green and pink. The crosses represent England as a modern nation with a diversity of cultures. The panel is designed to make the shirt inclusive. He clearly sees it as representing a true picture of the country.

Whether you think “the new fabric of England” graphic panel is nonsense or not is up to you. In my view its just good to see thought and meaning go into a shirt. Everyone knows how recently football kits have exceeeded their original mandate as simply a uniform on the pitch and this kit just continues that growth. Is it such a faux pas to put a message of some kind into a football shirt? Or should a footbal shirt just be lairy combinations of white flashes and coloured panels?

The kit will accompany England as they rebuild their confidence, status and credibility after South Africa and it will be interesting to see if Peter Saville’s vision of inclusivity will reunite the country’s football fans and football team once more.