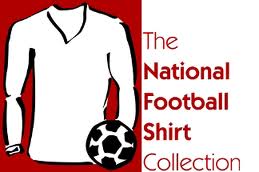 Although replica shirts still sell solidly and interest in new kits is increasing, one area of football shirt culture that is really growing rapidly is match worn shirts. No Sports Direct bargains here, the widening market in match worn shirts gives us ordinary mortals a chance to own a piece of history; a shirt off one of our hero’s backs complete with blood, sweat and sometimes tears. And thanks to The National Football Shirt Collection I recently held a Gazza shirt from Euro 96 that I imagine had all three.

The National Football Shirt Collection (TNFSC) is without doubt one of the most impressive collections of match worn shirts in the country. This collection is now being unveiled to the public via their new website that was launched recently and reveals, piece by piece, the jems of their incredible haul of match worn shirts. Highlights on show already include Denis Irwin’s shirt from the incredible 1999 Champions League Cup Final, Tino Asprilla’s 1996–97 season Newcastle United shirt and Glenn Hoddle’s Spurs shirt from the 1981 FA Cup Final replay – but there is plenty more to come. Collections of shirts as worn by greats such as Lev Yashin, Jimmy Greaves, Stanley Matthews, Peter Shilton & Gordon Banks are all in the TNFSC and will soon be presented on the site.

There are separate sites for the extensive collection of England and Wales match worn shirts and those pages will become complete in time with similar pages for Scotland and Northern Ireland coming soon.

TNFSC is the work of Neville Evans, whose collection has grown rapidly since his first purchases in the mid-1990s, and is curated by Simon “Shakey” Shakeshaft, an expert on match worn shirts and their authentication and the man behind the www.walesmatchshirts.com website that features his own enviable personal collection of Welsh jerseys.

Neville Evans’ collection of football memorabilia has been displayed, in part, in numerous exhibitions around the globe including the National Football Museum (due to re-open in Manchester next year) with whom Neville works closely. But the shirt collection has never been available to view in full anywhere – until now.

The site is very much a work in progress but will eventually include details of every shirt held in its vaults although due to the sheer scale of the project this may take years!

One Reply to “The National Football Shirt Collection”