Before putting together a page with the full kits for 2011-12 I thought I’d look at each team’s strips for the season in a bit more detail. First up, Arsenal. 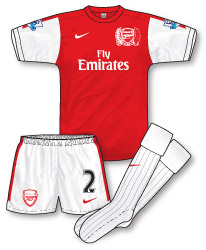 Biggest change on the Arsenal kits this year is the introduction of a new badge commemorating the club’s 125th anniversary. Frankly the new crest is HUGE and completely dominates the shirt. The design sees 15 laurel leaves on the left hand side of the badge and 15 oak leaves on the right. The reasons for these may not be immediately obvious (!) According to the club’s official site the laurel leaves “reflect the design detail on the six pence pieces paid by 15 founding fathers to establish the club. Laurel leaves represent strength” and the oak leaves “represent the origins of the club – the 15 founders met in the Royal Oak pub”. I was surprised to be honest that the meanings behind these symbols are so weakly contrived and don’t actually adequately reflect, in my view, the impressive stature of the club and its true beginnings.  I would venture that there are more iconic symbols that could have been used.

The rest of the home kit sticks solidly to good old Arsenal principles of red shirts and white sleeves, trimmed with just a sliver of red on each sleeve. Nothing wrong there other than the fact that an almost identical kit was launched just a year ago (the main difference being the crew neck colour). If the football world is going to persist with single season kits I feel manufacturers for the sake of simple value for money do need to design kits that offer a more substantially different design to the previous.

Another Arsenal kit principle seems to be one of creating confusion. Last year it was which goalkeeper top is the official first choice and the promotion of a third strip that it seemed they had no intention of wearing. This year its the socks. In virtually every game (I think) this season the regular home kit has been worn with white socks. Yet publicity photos of the new kit show the players sporting red pairs. And indeed, on the official site, only red home socks are sold. So whats going on?! Clearly there has been a last minute change in the official home kit but for some reason true replicas are not being offered. Very strange… 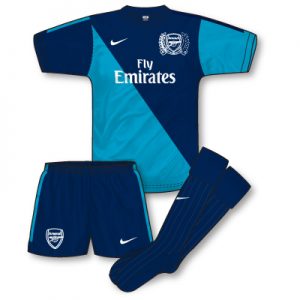 The away kit adopts the navy blue/teal colour scheme that has been favoured several times since Nike took over in the early 90s. In fact their first change kit for the club comprised of these colours. Basic cut/trim is identical to the home, the key design feature is the diagonal division of the shirt into the two colours with alternating sleeves. Not a bad look but one that is taking a bit of getting used to for me. As its the 125th anniversary I would rather have seen a more historical angle to the away kit than this. Navy socks are first choice but teal pairs will also be worn. As with the home kit, the slivers of trim on each sleeve (not sure if these appear on the long sleeved versions – can anyone confirm?) look great until the Premier League patch is applied over them. Wonder what happened to the rulings that sleeves need to be kept bare in order for tournament patches to be added?

In conclusion, a solid home kit spoilt only by the big crest and the fact that its actually not that much different to last years, and a brave away that may prove to be a bit of a grower!